This is our little boy Theo. He is a cheeky 15-month-old and has an older brother Edward who is nearly 4. Theo was born with Tar syndrome and we found out at our 20-week scan that his arms had not developed, and his hands were on his shoulders. When we first found out our little boy had no arms and other health conditions we were devastated as we worried about our baby’s future. The first 6 weeks were the hardest and having never seen a baby with no arms we just didn’t know what Theo’s life would be like. We worried about how he would cope and develop. We started to look for support and help. We found Reach and they were amazing, and provided parents to talk to and even Frank Letch who had grown up with similar limb differences to Theo. It was so helpful for us as parents to see the things that people with limb differences could do, from driving to painting and all the amazing things they accomplish. It was the positive hope we needed as every hospital appointment we went to was hard and scary. Reach helped us to not look at Theo’s disability but his ability. Theo is amazing and every day just gets on with things. He uses his feet a lot and is just starting to try and use his hands more. He bum-shuffles everywhere and takes delight in doing things he knows he shouldn’t, and his big brother loves him to bits. Don’t get us wrong. Some days are tough and I think the biggest challenge we have faced is how people sometimes react to Theo. Most of the time people are amazed at what Theo can do, and his big smile and long eye lashes. Unfortunately, there are times when people stare and point and even laugh, and for us as his parents we really feel for him and want to protect him as any parent would want to protect their child. Hopefully though, as more and more people see limb differences in public, in the media and in education, the more our children will be seen as we see them – amazing and beautiful. It is this that gives us hope, and our beautiful two boys. We love being part of the Reach family. Marcus, Rachel, Edward and Theo

What is TAR Syndrome? Thrombocytopenia Absent Radius (TAR) Syndrome is a rare congenital condition characterised by a platelet deficiency in the blood and the bilateral absence of the radius bone in the forearm. The hands, fingers and thumbs are almost always unaffected. Physiotherapy and occupational therapy are key in the management and treatment of TAR syndrome which has varying levels of severity and associated characteristics. 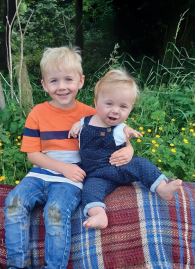