With such an amazing line up of nominees for this years Sue Stokes award, the trustees had a really difficult decision to make. The wonderful nominees included, Elijah Guy, Jake Carswell, Loen Groom, Luca Reese, Luke Mortimer and Shay Doran.

All the nominees showed enormous courage in facing challenges and have found ways of coming to terms with their limb difference and limb loss, adapting the way they do things so that they can live their lives without limits. 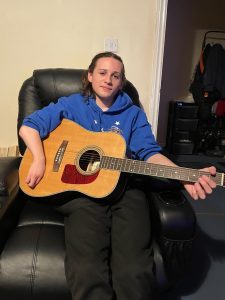 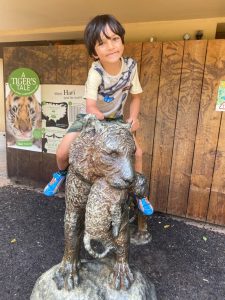 Youth Ambassador Ella Dickinson and Alastair Greener presented the awards, to Jake virtually, and in person to Luca during the annual Family Day. 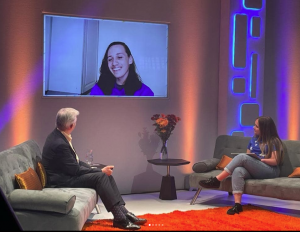 ‘From overcoming long and painful surgeries when you were younger you have not let your limb difference hold you back.

Not only achieving academically through school, your creative and artistic strengths have shone. You were awarded a school prize for art, and your musical talents as a guitarist have been recognised nationally in your place in the National Open Youth Orchestra.

The trustees were particularly struck with the way in which you have used your talents to help others.  Last year, you volunteered a beautiful pen and ink drawing you had done of a robin for Reach to use as a Christmas card.  We have sold many packs of these cards, and been able to raise money for the charity as a result of your generosity and talent.

We also noted the work you have been involved in with one of the local special schools in your area, creating a fighting fantasy game book, which will shortly be published on Amazon.’ 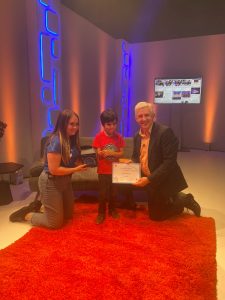 ‘As well as the resilience in dealing with questions about your limb difference from curious children, which many children with upper limb differences have to deal with, you have taken this a step further by independently deciding to give presentations on limb difference, prosthetics and adapted musical instruments to your cricket club and school class.

The trustees were so impressed by someone of such a young age – just 6 years old – having the foresight to recognise the value of public education and raising awareness of limb difference and the strength of character to stand up in front of your peers to help others understand it better and pre-empt their questions.  We thought this showed maturity beyond your years and was a wonderful celebration of difference and inclusion.’

Huge congratulations to the Reach member nominees & winners, you all shine so brightly!