Hero is now 4 and a half and life is good. She started in reception just a couple of weeks after she turned 4. I got myself in a bit of a state in the build-up to September, panicking about her being the youngest in the year and having a limb difference. I just didn’t want her to feel out of her depth and for her to start getting worries that she’d not had before. As with so many things for me, I needn’t have worried. Her confidence is blossoming and she’s got a wonderful group of friends. So far, she’s had no issues at all with questions or comments – that may have been helped by her attending the nursery attached to the school beforehand, so she was already pretty well known when she started.

She’s very independent – even more so when she’s at school. She’s able to dress herself, climb climbing frames and do most things that she wants. She’s a champion at dispelling my fears and I am (slowly) learning that I really don’t need to worry as much as I do. A prime example of that was a couple of weeks ago when Hero was tasked with threading some beads by her schoolteacher. I was quite anxious and had not really considered buying her beads before. I do spend a lot of my time battling the compulsion to protect her from potential or imagined emotional upset; my biggest fear is a parent is that she might lose her self-confidence or in any way feel like she’s less than perfect. However, she just did it, without any hesitation and as if she’d been threading beads all her life! She put the string in her ‘Mummy Hand’ and dipped it into the bead pot, gripping the bead in her fingers before lifting it up and letting it fall on to the string. Take that, Mummy!

Having said that, there is still a tendency for her to avoid certain situations when she doesn’t feel as secure. She won’t want to get on a swing if her feet don’t touch the ground, for example, as she doesn’t feel secure holding on. We’re seeing the same reticence to get on a bike, she’s just not confident yet. We’re not pushing her as she is definitely finding her own ways and she’s learning to trust herself. Just the other day she made it up and over a climbing frame that she’s been attempting to scale for the last two years. The look of surprise and glee on her face when she realised she could do it was priceless!

We’ve found a number of ways to make life a little bit easier for her, which seems to have helped her confidence. We were given an automatic soap dispenser by a friend, which she loves and has been brilliant over the last year of the pandemic! She uses a lolly pop stick instead of her finger to make spaces when she writes, and we switched from the school satchel to a backpack when she started bringing more stuff home from school than she could carry! All really minor tweaks that just help smooth the way a bit.

She hasn’t expressed any negativity about her hand at all yet, and we often talk about how wonderful it is and celebrate everything she can do with it. However, as her little sister gets older and more independent, we’ve started to notice a tiny bit of frustration creeping in from time to time that her younger sibling can do some things more easily than she can. But that’s had no lasting impact on her yet and after a split section of annoyance, she has been motivated to find other ways.

The biggest hurdle for us as parents has been our own fears and worries. As two-handed adults it was at first difficult to see how she would cope in our two-handed world. Some of the worries I had during the final months of our pregnancy and during her early years, just seem hilarious now we have her in front of us – totally capable, confident and just getting on with it, seemingly without a care. I remember crying over seeing a friend’s daughter opening a bottle of water, thinking Hero wouldn’t be able to do that. Now, I can’t marry up that anxiety and heart-wrenching worry with the sight of her in front of me just casually twisting off the lid without realising that it could have been a challenge.

Hero has been the best and the only healer from the initial fears and worries. It didn’t matter what anybody said, we needed to see it for ourselves before we could truly believe that she would be just fine – more than fine, in fact – she’s flourishing. 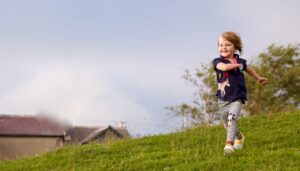