This is the wonderful story of Neil and Jack’s high tech odyssey.

“Santa could provide other children with wooden toys, complicated plastic toys, steel bicycles, miniature gadgets; but couldn’t deliver something simple such as a hand?” Neil Antrobus

Neil Antrobus and his son Jack have pioneered the creation of functional 3D printed hands for people with below the wrist limb difference, opening up new and exciting possibilities for many more of our Reach members. He is willing to share his knowledge to help other families.

“It was Christmas 2018, when I asked my son what he would like Santa to bring him. He replied “I would like a hand”. My son is called Jack and he was aged 7 when he first asked. Jack has three absent fingers, and a partial palm on his right hand, plus a fused radius bone at his elbow. He has limited wrist movement, partial use of his index finger and a short thumb. He has a shortened right arm.”

“My initial reaction was “I don’t think Santa can do that…….. would you like something else?” I also gave him a very vague “we will see” answer, in the hope that this was just a passing comment, and he would return to playing Minecraft and making deadly dinosaurs out of junk materials. I felt helpless and angry that I was unable to help my son.”
“Christmas passed and Santa didn’t bring Jack a hand. Jack was a bit confused and perplexed as to why Santa could provide other children with wooden toys, complicated plastic toys, steel bicycles, miniature gadgets; but couldn’t deliver something simple such as a hand? Everyone has them, so they must be easy to make, surely? Why couldn’t he look like everyone else? This conversation continued over the coming months. I tried to engage with the charity Enable, but without much success. I researched private prosthetic companies, but the costs were prohibitive to us as a family. Thankfully, the NHS were brilliant, and continued to provide us with some great support and suggestions.”
“This got me thinking. How could I actually help him? I was given an NHS information pack and read a number of articles about Hero Arms. This sounded both promising yet expensive, but I was committed to helping Jack so I engaged with Open Bionics but they could only provide a prosthesis to fit an arm below elbow and above wrist. Jack didn’t meet these criteria since part of his hand was present below his wrist. He was disappointed and also started to become more self-conscious and aware of his condition. This forced me into action.”
“Since there was no-one to assist with his specific needs, I decided to tackle this head-on myself. Santa was going to deliver!”
“I bought a budget 3D printer which I built myself. I figured out how to 3D print components, optimise the machine and use the software to allow me to make high quality parts. This took me about five months, working on it almost every evening after work. Jack and I took this journey together. He pressed all the buttons, chose the filament colours and helped with the assembly too. He loves to design and build things.”

“His first hand was created using on-line ‘open source’ designs. Some of these free blueprints were good but unsuitable for Jack, some were impractical and some simply didn’t work. I had to combine a number of ‘open source’ designs to make something that would fit and work well for him. Everyone is different and one-size definitely does not fit all!”
“Our very first hand didn’t go very well at all! The scale was not quite right, the parts didn’t fit together properly, the overall assembly was poor, the material didn’t really work and the functionality was non-existent. But Jack loved it. He took all the individual parts into school after they were printed to give his class a ‘show and tell’. He wore the final assembly with pride. It was his hand and he owned it!”
“I looked into improving it to keep Jack engaged. I 3D modelled a number of parts to match Jack’s hand/palm and modified others to improve the fit. The second hand was much better and gave Jack more functionality, the third 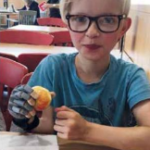 allowed him to pick up lightweight objects. The final one allowed him to confidently pick up an apple and eat it. This was a very emotional milestone in his journey, since Jack has never been able to do this before! There were lots of happy tears from both of us.”

“The ‘open source’ designs are basic and limited. I hoped that we could make an even better hand. He was clear about how he wanted it to look, feel, work, etc. I agreed to fit a torch in his finger and a secret compartment for contraband (so he could smuggle Tic-Tac’s into school!). I did however have to refuse his request to install a flame thrower in his thumb!”
“I spent many more evenings teaching myself Computer Aided Design (CAD) and Solid Modelling, so that I could design a high quality original prosthesis from scratch. This was extremely difficult, and I had to rely heavily on the engineering experience I gained whilst serving in the Royal Air Force and working at Rolls-Royce. It took me a long time to get right, and I am still learning; constantly making improvements. But I think I am there now. I can design and make an original bespoke pros-thesis, below wrist, as long as there is some or limited wrist movement present. I hope to introduce sensors and motors into a future design to give improved performance.”
“My aim from the start was to make a finished product to a very high ‘factory’ standard for my son. With sheer determination, Jack and I did this. Jack is very pleased with the final product so far and his confidence has grown remarkably. He is incredibly happy and is constantly coming up with ideas and improvements to make his new hand even better for him. The latest feature is a thumbnail on one of his fingers, so that he can attempt to play a guitar. He has also asked for a hand with a socket to hold a tennis racket; I’m not sure how I’m going to do that yet!”
“He has very effectively used this device over a period of 6 months. He is a changed boy. The only issue we had, was with a few ‘rub’ spots, that have been corrected by adapting the socket shape. Another fundamental issue was Jack growing.

Luckily we can easily re-scale his hand to make it bigger, using the software and 3D printer to keep pace with him. He has a hand for life.”
“This has been a great journey for Jack and me. If I can help anyone by sharing the work I have done, I will be happy to do so freely. I am not yet at a stage where I can mass produce specific hands for people other than Jack due to my work and family commitments: however, I am open to designing/manufacturing a number of these in the future for children who may need a below wrist prosthesis, if there is enough interest. If you would like further information about the hand we built, the tools we used, materials, assembly, 3D printing, design or anything else, please do contact me at: ArticulateUK@hotmail.com”

“I will freely give help and share everything we did, in the hope that our experience may help and inspire others.”