Searingly honest, this powerful piece was a rare glimpse into the emotional turmoil of a parent faced with the birth of a child with a difference. Her list of lessons learned would be enormously helpful and reassuring to parents expecting or living with a Reach baby.

“I have learned a huge amount in the three years since Hero was born. The first lesson was that it is OK to be NOT OK. I had already been diagnosed with prenatal depression and when we heard about Hero’s hand, I was already not OK. I struggled a bit but I turned immediately to Reach and everybody was happy and their kids were thriving but I was not OK. I felt a lot of guilt about not being OK and the guilt made everything ten times worse.

Beating myself up about feeling bad. So the lesson was it’s OK to NOT be OK. It doesn’t mean you love your children less or that you don’t care. Of course you do. 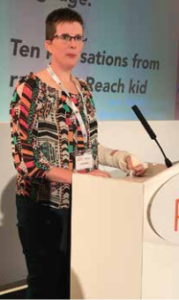 The second lesson was that is OK to feel OK. I felt my child stood out for being incredible. And it is OK to feel lucky and blessed that they are different.

The third lesson was that it has never been as bad as I feared. It has never manifested itself as badly as `I thought it would. As a Reach parent, perhaps we worry a bit more but we have got an extra concern. My biggest fear was seeing my worries in her eyes. I didn’t want her to be upset. Learning that the way `I pictured things, like going to baby groups, it never happened the way I had worried about it. Realising that my worry is not going to happen is consoling.

My fourth lesson was to beware the hyper vigilance trap. Hero had just learned to walk. We were on a visit to HMS Victory and I heard someone behind me say ‘Oh my god, where is your hand?’ I was going to kill him until I saw that Nelson had lost his arm in battle and the man’s child had tucked his arm inside his jacket and was pretending to be Nelson. I was being hyper vigilant. If you are feeling insecure, you look at people as potentially judging you.

The fifth lesson was that it’s not ‘just a hand’, but sometimes it is. Last year Alex Brooker said having two hands was a luxury not a necessity but I don’t want anyone else telling me that it could be worse. Most of the time now it doesn’t matter. It is ‘just a hand’ and we don’t notice it.

My sixth lesson was that my child is my best teacher. Reach people were incredible. Before Hero was born it helped seeing people going through what I was going to be having. The most powerful healing though has been watching her grow up. So if you are expecting a Reach baby now, just give it time. I have got calmer and calmer with each birthday that passes. Watching her grow is what helps me.

The seventh lesson is that she will find her own way. Let them go and find their way.

The eighth is that bones heal stronger but words can sear you and hurt for a very long time. Some things you hear will cut you to the core. When Hero was a baby, a lovely caring seven year old said it was a shame she only had one arm as s

he could be so much more fun if she had two. Those words still make my heart ache. How do you react? It’s OK not to react or you can use the situation to educate them.

Lesson nine: Hero is not sharing MY fears. Knowing that she was not feeling my fears was a huge relief. She is not suffering the way I am suffering. The emotional journey has to be the biggest thing but it is a matter of learning to trust her.

Lesson ten: We were worried we were going to be linked to a charity for the rest of our lives but now we realise it is wonderful and we have met great people. I found Reach very visible but I used to be a journalist and I felt overwhelmed and I found Reach the same day that we found out about her hand. I found I was not alone and I was so relieved I was not isolated.