I found out about Maddison’s limb difference at my 20-week scan. When the sonographer told me that her right hand was missing, I was in shock. At that time, I didn’t know what that meant or what the future would look like for my baby. We had scans every three or four weeks until I was 36 weeks pregnant.  The weeks from that scan right up to her birth were a mixture of emotions. Firstly, I went in to protective mode and told everyone I was fine; then I cried a lot and kept blaming myself for what had happened even though every professional was telling me that this was just, ‘one of those things.’ I had no real medical reason to even give me an answer as to why this had happened. Then the anger started and I couldn’t bear to listen to anyone else’s problems because they had two hands and so did their children! I allowed myself to feel each of these emotions and I felt stronger once each one had passed.

I have seen these words written so many times from other parents from Reach and I now echo them myself: I would have saved myself so much pain, tears and guilt if I knew then what I know now!

The first two months after Maddison was born were tough, this is when I finally grieved for her hand. Once she grew a little, started moving around and her little personality started to shine through, she would surprise me daily. At just five months old, I have seen her grab with her arm, hold her arm, push herself up, roll over, cuddle into me with her arm and reach out for something. I am constantly filled with happiness, excitement and overwhelming love.

What I have learnt above all else in the past five months is she is not just her arm. She is the happiest soul who brings so much joy to our lives. I am proud to be her mummy. 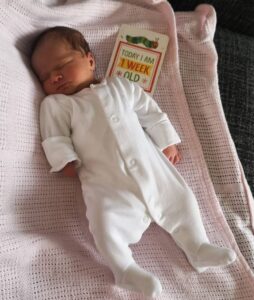